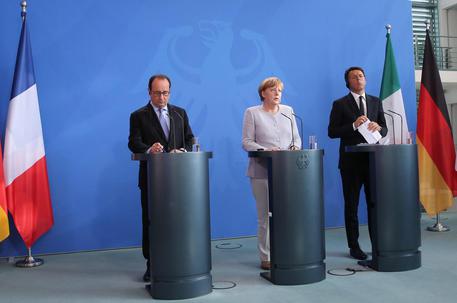 (ANSA) - Rome, June 27 - Everyone was deprived the day Britain voted to withdraw from the European Union but those who remain musn't waste time turning the page, Premier Matteo Renzi said Monday.
The June 23 referendum vote in the UK has deprived everyone of "the delicate beauty of the European sentiment," Renzi told reporters after meeting with French President Francois Hollande and German Chancellor Angela Merkel in Berlin to discuss the implications.
"The day after the referendum we woke up deprived of something - a precious object had been taken away from us," Renzi said. "We must turn the page," he said. "We can't waste time. But at the same time, let us work on a strategy in the coming months that brings us to the heart of what Europe must be". The Brexit vote "saddens us but it is also true that this is a propitious time for the EU to turn a new page," Renzi added.
Speaking after markets closed down and bank shares suffered heavy losses on the Milan stock exchange, Renzi called for "caution, common sense and balance". "There is no time to lose, but we are in a position to face and fix any problems that could arise, in the credit world and beyond," the Italian premier said.
He, like Merkel, denied France, Germany and Italy are setting up a three-way "directorate" to steer the EU in the aftermath of the Brexit.
Today's three-way summit "only reinforces our capacity to act in the wake of the (Brexit) referendum" but the ultimate decision will be taken jointly by the remaining EU members, Merkel said after a reporter asked whether a "directorate" was in the works.
The EU is "a complex organization in which each contributes - it doesn't have a directorate," Renzi echoed her.