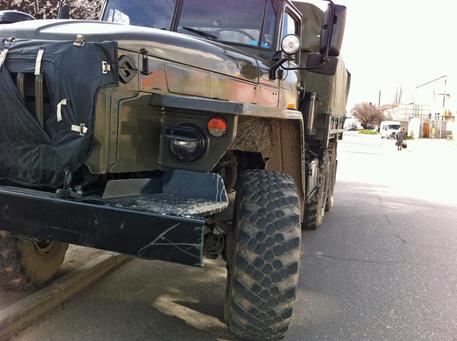 (ANSA) - Moscow, August 14 - Ukrainian forces on Thursday surrounded the city of Lugansk, a pro-Russia separatist stronghold, and regained control of the road connecting it to the Russian border, Ukraine Security Council spokesman Andrei Lysenko said.
As well, pro-Russia separatist commander Igor Strelkov resigned as defense minister of the self-proclaimed People's Republic of Donetsk, named after the other east Ukrainian city that has seen heavy combat. A total of 839 civilians have been killed and 1,623 wounded since fighting between government troops and separatists broke out in March after Russia annexed Ukraine's Crimea peninsula, public health officials said.
As government troops advanced on the ground, the Ukrainian parliament approved economic sanctions against "172 Russian and other citizens and 65 entities" for "supporting and financing terrorism" within their country.
The Kiev government has defined eastern separatists as "terrorists".
Also on Thursday, President Vladimir Putin told MPs that Russia "will do everything possible to end the eastern Ukraine conflict as soon as possible".