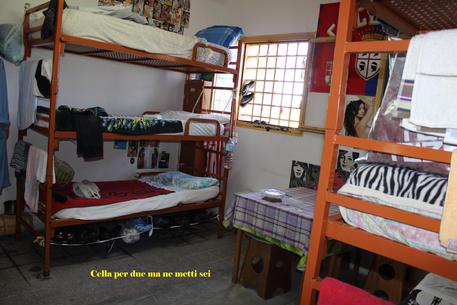 (updates previous) (ANSA) - Strasbourg, June 5 - The Council of Europe on Thursday lauded Italy's efforts to ease its chronic prison overcrowding. In a ruling, the Council's ministerial committee recognised the "significant results" Rome has achieved in addressing the problem.
It was the first time in decades the Council, Europe's leading human rights body, praised government moves to tackle the stubborn issue.
The CE ministers' decided to reexamine whether Italy has complied with a sentence handed down by the European Court of Human Rights at a later date, at the latest in the June 2015 meeting, but after a thorough progress assessment has been made next year. Last year the European Court of Human Rights gave Italy one year to institute reforms to eliminate inhumane prison conditions - a time period that ended May 27.
Sources at Italy's highest court last Thursday said a decree that overhauls Italy's drugs laws and reclassifies marijuana as a soft rather than a hard drug paves the way for releasing "thousands of convicted smalltime drug dealers from prison".
A 2005 law that equated the possession of soft drugs to hard drugs has been blamed as a contributing factor to severe overcrowding in Italian prisons.
The Senate on May 14 gave final approval to the decree.
Meanwhile, parliament in early April passed another major penal reform bill into law aimed at unclogging painfully overcrowded cells and decriminalizing undocumented immigration.
The new law makes house arrest or detention in a healthcare facility the primary form of incarceration for lesser crimes, and the default form of detention for sentences under three years.
The new law also decriminalizes a number of charges, including undocumented immigration.